The Greek islands are undoubtedly among the most beautiful in Europe. There are altogether more than 5000 islands around the coast and extend through the Aegean, the Ionian Sea and the Mediterranean.

Known for their rocky coastline, great beaches and lots of sunshine, the Greek Islands can be the ideal destination for all vacationers who love nature and the sea in particular. Apart from beautiful beaches, these islands are also known for their historical past. They are home to many attractions which are very popular with the tourists. Here are some of the most popular islands in Greece: 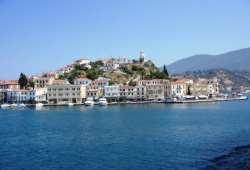 It is an island which is very attractive, offering historical beauty and beautiful unspoiled nature. If you are planning a trip here make sure to include a visit to the Temple of Aphaea (known locally as Aphaia). Steeped in an ancient Greek legend the temple was built as a shrine in honor of an unfortunate woman called Cretan. Aegina has so far managed to escape the mass tourism that has affected many other Greek islands. This is why, you can expect a lot of peace and tranquility there.

In addition to swimming in the beautiful waters that surround this island and exploring isolated monasteries or ancient churches, you can also explore the local cuisine. 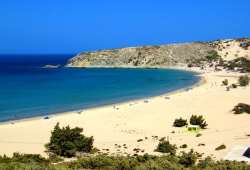 Gavdos is definitely an island that is worth visiting. It is the southernmost island in Europe and is known for the way of life of its inhabitants. The two main beaches are Agios Ioannis and Potamos which are both very nice and quiet. They are probably the most beautiful beaches of the Greek Islands.

There are not too many tourist facilities / accommodation on the island, so a more appropriate choice would be to stay in the nearby island of Crete, and then reach this beautiful island by a boat ride. The beauty of this island will surely mesmerize you! 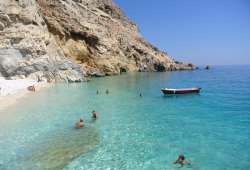 Ikaria (also known as Icaria) is one of the most beautiful Greek islands. The island is located in the Aegean Sea, 19 km from Samos. It took its name from Icarus, the son of Daedalus in Greek mythology. Legend has it that Icarus fell into the sea near this island. Icaria is very mountainous and in some places it is almost inaccessible.

The island offers green valleys, wild hawks and some beautiful beaches. The main town is Nas, which is home to a small beach in a cove that remains almost deserted most of the time. It is a place where you can relax and swim into the crystal clear waters of the sea. It is an island which is really interesting. 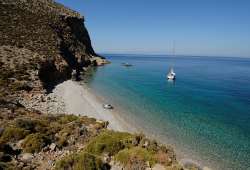 The small, quiet and remote island of Tilos is located in the Aegean Sea, situated between Kos and Rhodes. It is definitely considered as one of the best Greek islands, named after Telos (the son of Helios and Halia), who is said to have visited the island in search of medicinal herbs to cure his sick mother.

The island is very mountainous with plenty of plants and wildlife that makes it a travel destination ideal for wildlife lovers and for those who appreciate nature in general. The fauna of the island is quite unusual with a collection of beautiful birds with exotic colors and a unique population of pygmy elephants. 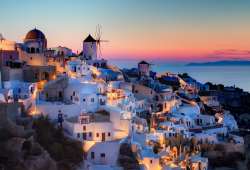 Santorini is the island to visit if you're looking for romance and unforgettable photographs. Among the towns to visit is Fira, a small town that lies on top of the island on the west. The main attraction there is a reef about 250 m above the sea which looks very beautiful.

Most of the shops that sell postcards in Greece will have photos of Santorini and once visit it, you will realize why.