Scotland is one of the most picturesque locations in the world, but all the scenic glens and lochs are also the setting of some of the spookiest ghost stories in this part of the British Isles.

You can get started on a chillingly exciting tour of Scotland’s haunted castles from April to October, and it’s best to allot at least a week of spooky fun.

You can fly to the Edinburgh Airport, which serves numerous flights from and to different parts of Europe and the United States. Glasgow International Airport is also a good choice, but you might need to drive to Edinburgh to get started on your spooky Scottish fly drive holiday.

The best place to start your spooky self-drive holiday is at Airth Castle near Edinburgh. There will be a staff to take you on tour in and around the castle grounds, and you can also spend your first night in here. Among the ghosts that roam Airth Castle are some playful kids and a long-dead nanny who love reprising her old job of watching the children.

After Airth, you can head to Stirling Castle, perched on a rock and overlooking the town of the same name. It is said that a lady in a pink gown haunts the castle, and many locals and visitors have speculated that this is the ghost of the infamous Mary, Queen of Scots. Another noteworthy spectre is a lady in grey, who appears to announce a forthcoming disaster. Linlithgow Castle is also nearby, the birthplace of Mary (Queen of Scots), with a famous ghost said to be of Margaret Tudor. 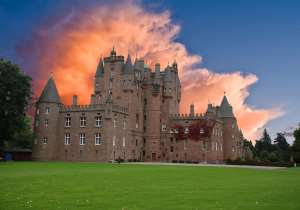 Your fourth spooky destination is Glamis Castle in Fife (shown right), which was once a favorite haunt of Macbeth. The ghosts in Glamis include a noblewoman accused of witchcraft, a servant boy who met his frozen end centuries ago, a vampire, and a woman whose thongue was cut out. Perhaps the most infamous of spooky stories in this castle is that of the Missing Room, where an earl of the castle was once said to have played cards with the devil!

Drive into the Highlands for the Cawdor Castle to learn more about Uisge Beatha (the local term for the region’s excellent whisky) and three of the castle’s resident ghosts: a spectre in velvet, a young lady with her hands chopped off, and John Campbell. After Cawdor, head over to Dunrobin Castle, one of the most beautiful castles in the country and once the homestead of some of the most powerful Scottish earls. A young woman desperately in love with the wrong man is said to haunt this castle.

Urquhart Castle by the infamous Loch Ness is up next, but there is more spooks in this area other than the popular lake monster Nessie. It is said that the victims of the 1692 MacDonald massacre haunt the castle up to this day.

You can head back to Edinburgh and visit its eponymous castle, with two musical ghosts: a drummer and a piper. It is also said that spirits of French prisoners still haunt the castle vaults!