Iceland is one of those places that seemed to be blessed with amazing, majestic scenery in every inch of its territory. However, all the majestic scenery seems to be intimidating to a casual traveler—and indeed, driving through the backroads of Iceland is strictly for those who are brave enough to go off the beaten path.

For this adventure, you have to rent a 4WD (plenty of places to rent from) and have enough guts to truly enjoy the rugged splendor of Iceland.

To embark on your journey to the backroads of Iceland, you have to fly in to the Keflavik (also known as Reykjavik-Keflavik) International Airport. WOW air and Icelandair have regular flights to this hub.

First of all, this self-drive holiday must be attempted in the summer (around July to August) so you can fully enjoy the trip. You will fly in from the Keflavik International Airport, which is the closest international hub to the Snaefellsnes region—which is best known for its breathtaking volcanic landscapes. The region also boasts of different types of northern geography, which is almost unearthly in its beauty. 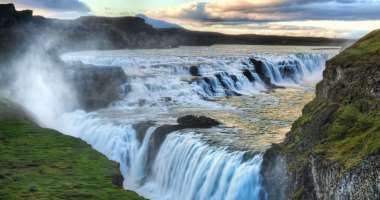 There are many highlights in a self-drive holiday along the Icelandic backroads. You can first explore the Golden Circle, a popular tourist route that loops around 300 kilometres from Reykjavik into central Iceland. Pingvellir, a national park, is one of the best parts of the Golden Circle—it’s also home to the Pingvallavatn, Icelan’ds largest naturallake. The Gullfos waterfall (shown right) is another must-see site, popular among tourists because of its unique “staircase” formation. And then there’s the Haukadalur, with the geysers Geysir and Strokkur.

The picturesque island of Flatey can also be part of your tour of the Icelandic backroads. Summer is the best time to visit the island as most of the houses are only occupied during the warmer months. Make sure to visit the centuries-old monastery perched on Flatey’s highest point. The Snaefellsness Peninsula is also home to natural geothermal pools—including one in Stykkisholmur, which is perfect for tourists not quite used to Iceland’s infamous nippy weather. Another noteworthy geothermal pool is Lysuholslaug, which boasts of carbonated (naturally so) water with plenty of minerals that could facilitate better health.

Jokulsarlon, a breathtakingly beautiful glacial lake, is located within another noteworthy destination, Vatnajokull National Park. The tongue of the lake’s prominent feature—the Breioamerkurjokull glacier—can be visited through jeeps and snowmobiles (you cannot self-drive into the glacier, though—you must hire a guide for this part of the journey) for dramatic views of an otherworldly, icy wonderland.

You can end your journey through the Icelandic backroads at the Westman Islands (known to locals as Vestmannaeyjar). Heimaey is the largest of the islands, with a population of over 4,000 residents. The “home island” has a scenic harbour (which was almost closed because of the eruption of the Eldfell volcano), as well as annual festivals where tourists can partake of a feast prepared by locals, which can sometimes include puffin meat.